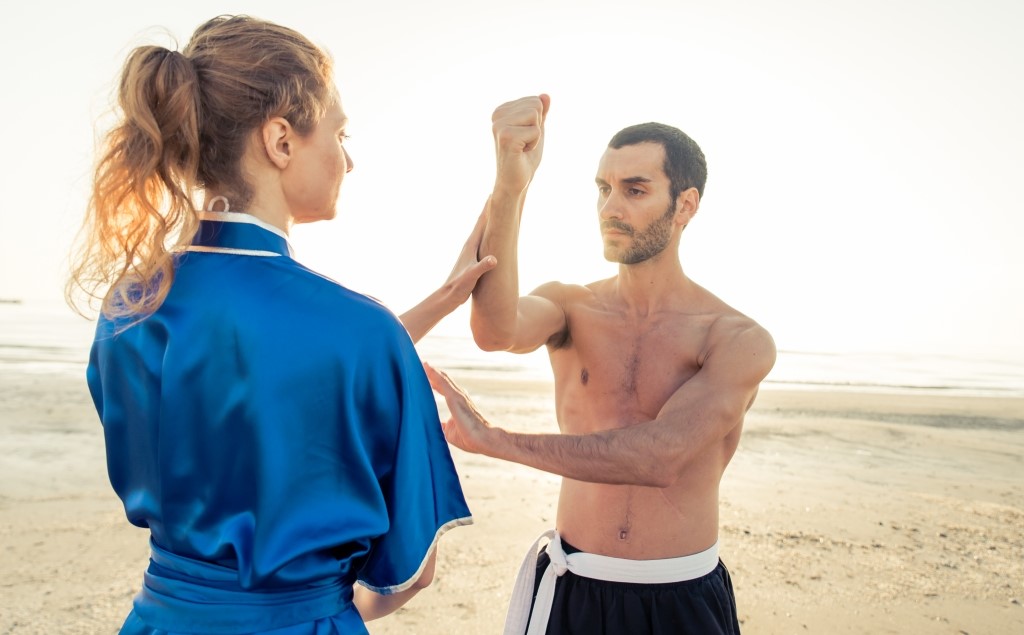 By Jim BentleyApril 14, 2022blog
No Comments

Have you ever watched old Bruce Lee movies and wondered how he was such a good fighter? Well, if you dug any further than that, then you know that Bruce Lee was a practitioner of a self-defense art-form that is almost three centuries old called Wing Chun. The foundation of this self-defense fighting style was laid by a Buddhist nun Ng Mui. He wanted to create a fighting style based on the weaknesses of the other fighting styles, which the Shaolin warriors practiced. So, with the help of the four elders – Fung Do Dak, Bak Mei, Miu Hin, and Jee Shin Seem – in the Siu Lum Temple of Fuijan China, Ng Mui developed, practiced, and taught Wing Chun.

The entire fighting style was based on adaptability. Therefore, the style kept changing and adapting itself as time went on. The first practitioners of Wing Chun didn’t simply learn the art to defend themselves against Shaolin warriors, but they also learned the philosophy behind it. Master nun Ng Mui created the art based on the exploitation of other Shaolin art forms, however, he also knew that with time, the Shaolin warriors would modify their techniques and make their training harder to defeat this style of fighting. Thus, he taught his students to study their opponents and modify their styles accordingly.

Thus, Wing Chun went on to becoming famous worldwide after the esteemed masters worked tirelessly to spread the art to keep it alive. It was through their efforts that the art wasn’t lost to time and was preserved by people the likes of Dr. Jim Bentley, who is a master in the art form himself.

With time, Wing Chun, was even brought to mainstream media when Bruce Lee arrived on the big screen. Bruce Lee was a student of Ip Man, who was a prodigy, as well as a master in the art of Wing Chun. His role in teaching Bruce Lee the ideology, and training him played a huge role in Bruce development. Despite the fact that Bruce was already an extremely talented individual, Master Ip taught him how to harness his full potential in the best way possible. This is proved by the success Bruce achieved in his acting life.

Even though Bruce’s movies didn’t mention Wing Chun specifically, his appearance and interviews gave the art a lot of fame. The popularity of Wing Chun grew tenfold with the style taking the west by storm. Many Chinese Dojo’s took advantage of this and started teaching the art to the next generation. The popularity Wing Chun gained was so wild that Jeffrey Lau and Corey Yuen saw an opportunity to capitalize on the interest. They decided to make a biopic, of sorts, on the life of Bruce Lee’s master, Ip Man. However, the studios which greenlighted the movie closed and the film was abandoned.

This idea was later picked up by producer Raymond Wong, who developed the film after getting consent from Ip Man’s eldest son, Ip Chun. This film starred Donnie Yen as Ip Man and gained worldwide fame. So much so that the producers released two more films, converting it to a trilogy.

The reason behind the worldwide fame is less so because of the masterful direction and admirable fight sequences of the films, and more so because of the protagonist it portrayed. There have been other movies with storylines just as good and fight sequences just as admirable but the people loved the character of Ip Man, who has been shown as the embodiment of Wing Chun.

The wild success and popularity of Wing Chun in recent times is largely in thanks to the entertainment industry, which brought the art form to the limelight. Nevertheless, there have always been those to carry down the legacy of the Buddhist monks. This, along with countless victories in regulated and documented competitions, makes Wing Chun one of the best forms of fighting there are!

Dr. Jim Bentley a martial arts instructor. He is also the author of WING CHUN The Evolutionary Science of Self-Defense, Combat, and Human Performance. In addition, Dr. Bentley has written many blogs on the importance of self-defense techniques, tactical efficiency, principles of Wing Chun, and how they could be used in the face of danger. Dr. Bentley also provides certification programs through his website BeachTownAthleticClub.com. As a doctor he provides care for many legendary martial artists and current MMA fighters like Erik Paulson, Curtis Millender, and Pearl Gonzalez. With his acclaimed healing methods, and martial arts curriculums he wants to spread his message to the people that the science, art, and philosophy of martial arts is truly a way of life. To learn more about Dr. Bentley please visit DrJimBentley.com.

Sifu Dr Jim Bentley has taught countless students and provided many self-defence courses to people worldwide. The author aims to help empower everyone that wishes to learn to be prepared for anything at any time.